Fabric Shopping in Paris is very different than what I’m used to here in the states. I went on a Saturday morning after a somewhat lengthy cafe sit. Within a few minutes of getting to the shops at the base of Sacré-Cœur, the markets were slammed. I thought I would share helpful tips I picked up along the way for anyone else who might be a bit daunted by fabric shopping abroad. 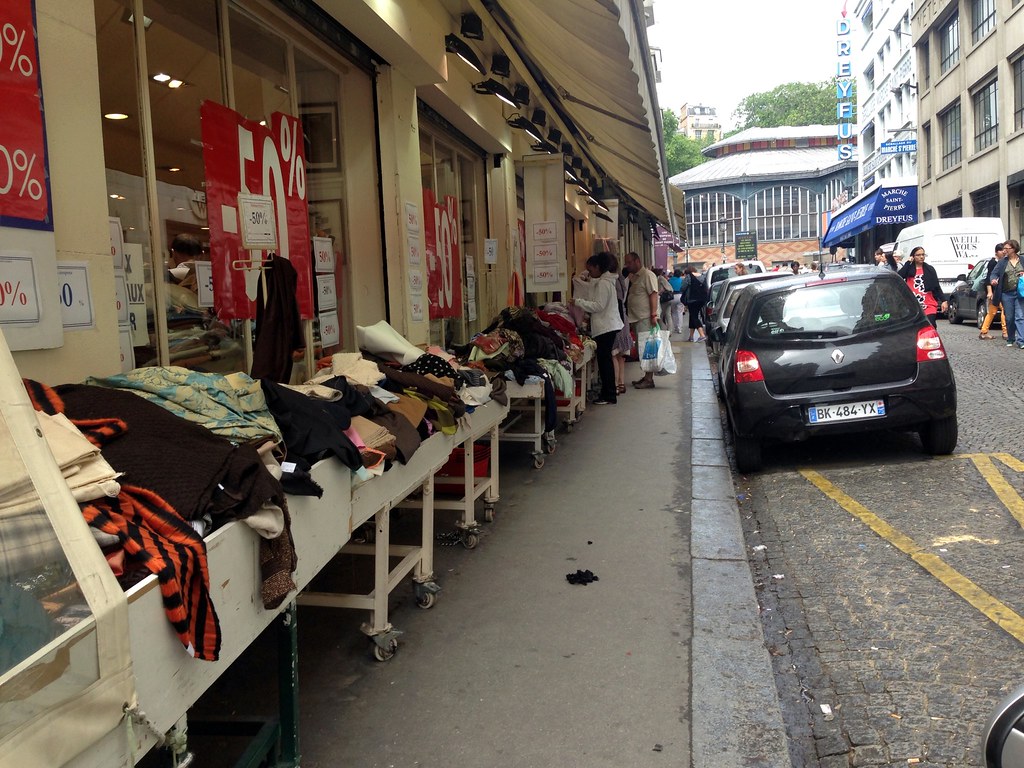 The french seem to appreciate a good fabric sale as much as anyone here in the states. Even though the signage will all say things like  “Coupon -50%”. There’s no coupon to be found, and I just took that this meant “Sale”. Most of the sale fabric was found in outside bins in pre-cut lengths. They had little stapled on tags stating they’re meterage, and price. The price was for the whole lot, not per meter.  [Even though the rest of the world uses meters, its only about two inches more than a yard, so don’t worry so much about getting the conversions right. You’ll just end up with a few inches more than you need. ] I actually really liked the whole bin setup. Most of the fabric was in three meter increments, which works well for most simple tops and dresses. It wasn’t too hard to find a matching cut if you needed more either. Although the picture above looks pretty sparse people wise, in only a few minutes it became sort of a mad grab. I take it that many more people actually sew their own garments in Paris than in the Midwest. From the bins I ended up getting some kind of mystery knit that’s destined to be a Moneta dress. Three yards for 7€ isn’t too shabby. 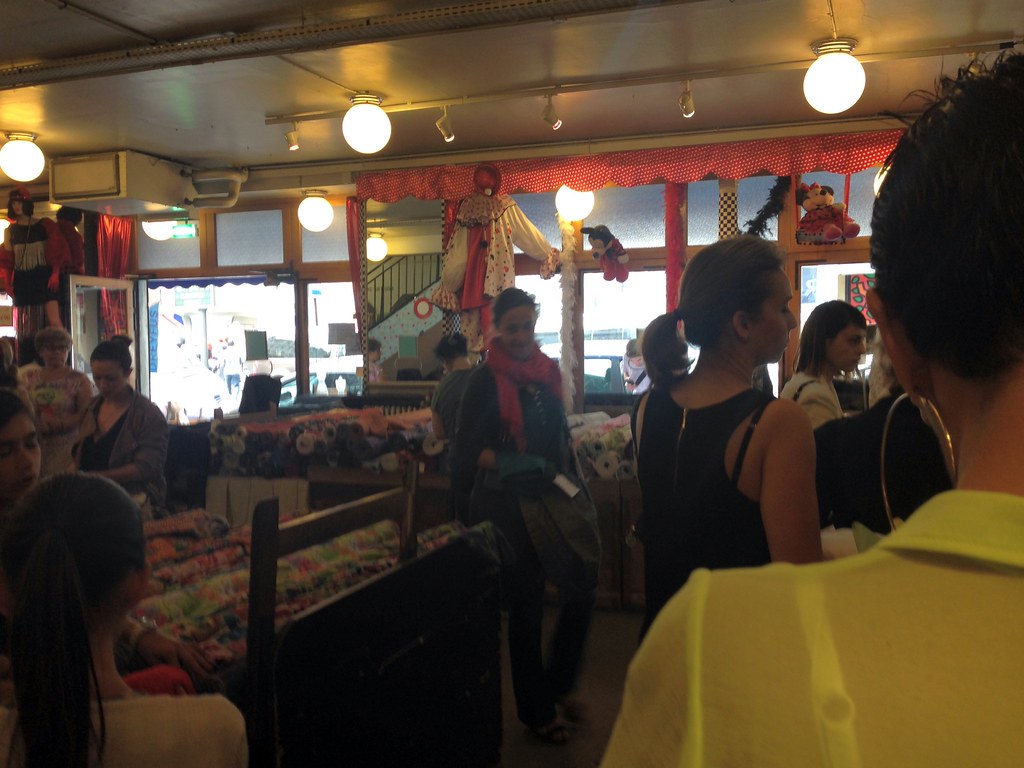 Right across the street from all the discount store was Marché st. Pierre. It was similar to what I am used to here in the states, but still had some small differences. Like everything else along the street it was packed. It had more than one floor (I think?) but I stayed mostly towards the first floor. They had some really great African wax prints on “Coupon” for about a euro per meter, and I’m still kicking myself for not picking a few yards up! I should have blown the forty euro I ended up bringing home on pretty fabrics. Instead I got thoroughly gouged exchanging it at the bank for way under market value. I did pick up a really pretty bird print cotton. It’s just a bit lighter than quilting weight, but not a cotton lawn. In most of the french fabric stores there’s not cutting table to speak of. The employees stand around the store with a meter stick and scissors strung around their necks. You show them the fabric you want, and the measure on the fly, cut a snip in the fabric, and rip it the rest of the way. [Make sure to greet your fabric cutter! Say please, thank you, and before leaving au revoir! The french are sticklers for manners.] 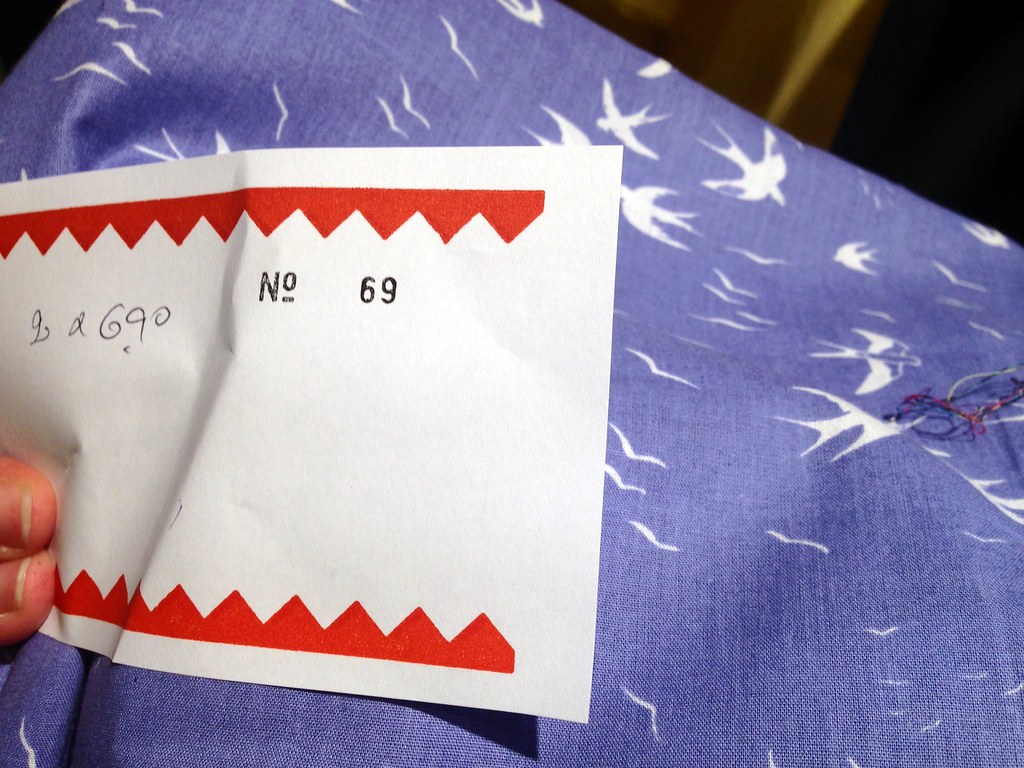 Your cutting attendant will give you your fabric and a ticket. You then get into what by now had become a very fast moving, but seemingly endless line. You hand you ticket to a cashier person in a glass booth and once she calculates your bill you give her your euros and leave with pretty fabrics!

Although fabric shopping in Paris can feel a bit more intimidating than in the states, I enjoyed being surrounded by so many fellow garment sewers! Sometimes in the US it can feel a bit like fabric stores cater more towards the quilt and home decor crowds. I found the opposite to be true in Paris. In fact I only went into one store in about ten that even cater to quilters. One of the many immeasurable reasons that I wouldn’t have minded just staying in the city of lights forever.